Puccini’s Tosca at L.A. Opera through the 8th June

Verismo, a largely Italian operatic style employing a gritty naturalism current around the turn of the last century, was its day’s reality television. Shocking and sometimes grisly narratives involving murder, suicide, adultery, prostitutes and la vie bohème were stock-in-trade for colorful scores by such figures as Umberto Giordano, Ruggero Leoncavallo, Pietro Mascagni, and Riccardo Zandonai. Giacomo Puccini, however, was its finest exponent and his opera Tosca which premiered in 1900 perhaps its finest expression. L.A. Opera is currently giving this warhorse an outing in a production from Houston Grand Opera with two major international singers, Sondra Radvanovsky and Marco Berti through the 8th June. 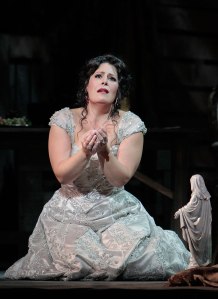 The highlight of the performance (heard Sunday afternoon the 26th May) was certainly Radvanovsky and Berti, two full-throttle Italian (and Italianate, as the former is from Chicago) singers who were an excellent match for each other. There wasn’t a high note that Berti couldn’t hit—or sustain for many bars—he was in top form, and he navigated painter Mario Caravadossi’s high tessitura with complete aplomb. His ringing “Recondita armonia” which more-or-less opens the opera was spot on as was his last, wrenching “E lucevan le stelle” sung the dawn before his execution. Radvanovsky’s gigantic soprano—characterizing appropriately enough opera diva Floria Tosca—cut through Puccini’s wall of sound. The only drawback was that the two didn’t seem to have much in the way of physical chemistry. Radvanovsky is surely one of the leading Verdian sopranos singing today, amazing audiences in the recent Trovatore in Chicago and the Met. I couldn’t help but wonder if she is less comfortable with Puccini’s verismo. Large of voice, Radvanovsky sang passionately. She however lacked the warmth and humanity of timbre that Leontyne Price brought to the role. (I have fond memories of Price’s “Vissi d’arte”—Tosca’s cri de coeur of living for art and love—in recital.) Nor was she as subtle yet intense as my first Tosca, Shirley Verrett (in a Washington Opera performance in early 1980s with Carlo Bergonzi).

The company’s beloved general director Plácido Domingo—one of the greatest Caravadossis of his time—was the conductor. He delivered a deliberate and expansive account of Puccini’s score to loud ovations, but it lacked the propulsion to keep the drama moving along as briskly and effectively as I prefer. Neither did the orchestra exhibit with Domingo the precision typical under music director James Conlon’s baton. 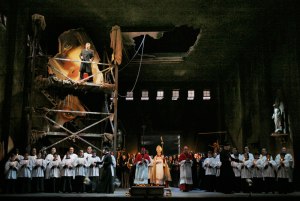 The Act One finale of “Tosca,” with Lado Ataneli (at upper left) as Scarpia. Photo: Robert Millard, courtesy of LA Opera

Musically disappointing was Lado Ataneli’s Baron Scarpia, Rome’s corrupt chief of police. Ataneli—a well known quantity in the opera world and an experienced Scarpia—was completely underwhelming. His voice—unlike Berti’s or Radvanovsky’s—was unable to penetrate the theatre. In his first big moment in Tosca at the end of Act I, Scarpia, following an escaping political prisoner into the church of San Andrea delle Valle, finds himself in the midst of the congregation singing the Te Deum. Ataneli—as the chorus crescendos gloriously in their hymn of praise—tells the singer (“Va, Tosca”) to go to the concert and into the trap he’s set for her. It should drip with malevolence. Ataneli was unable to project physically and vocally Scarpia’s menace. It was downhill from there.

But then, perhaps that was partially the fault of director John Caird. This famed director of Broadway (as in Les Miserables) should stick with the Great White Way. His Tosca was a complete disaster: grim, dingy and cluttered both scenically and dramatically.

The performance began promisingly with a dramatic, blood-soaked scrim curtain that references both the artist’s métier and the brutal violence to come. However it rose to reveal a unit set (designed by Bunny Christie along with the costumes) that evoked a high school gymnasium, rather than a Baroque church, Renaissance palace, or papal fortress. It had nothing to do with the “reality” of the place nor did updating the costumes to Puccini’s era—the turn of the last century—accomplish anything. I’m all for high-concept productions and have relished the opportunity Domingo and the company have given us to experience them, most recently a provocative and wonderful Flying Dutchman by Nikolaus Lehnhoff. But this current Tosca makes no sense. If a director is going to update or abstract an existing story, there must be some rationale to do so that brings out fresh insights from the narrative.

Caird’s most egregious misstep was the highly distracting interpolation of a new character—Floria Tosca as a young, innocent girl—during each act, at the last beckoning Tosca to  her death (as if betrayal, deception, murder and the execution of her lover weren’t encouragement enough). I most emphatically am not a traditionalist in my theatrical views, but Caird could have well regarded as a model of clarity and dramatic incisiveness the legendary Franco Zeffirelli production for Covent Garden in 1964. Both Maria Callas and Tito Gobbi created the characterizations of Tosca and Scarpia that subsequent singers have attempted to emulate (this acclaimed production was so vital it was still on the boards thirty years later when I saw Maria Guleghina star in a revival).

In what I suppose was to be the scenic tour-de-force of the production, the “high school gym” (in Act II Scarpia’s rooms in Palazzo Farnese) is a warehouse filled with a treasure trove of Italian masterpieces (The Dying Gaul from the Capitoline Museum and Caravaggio’s Crucifixion of St. Peter from Santa Maria del Popolo, for example). It is a rather obvious comment on Scarpia’s greed and corruption. However, the opera—and the play by Victorien Sardou on which it is based (1887)—sets the action during Napoleon’s occupation of Rome. Caird could have made his point of view really work by keeping the action set in the early 19th century, when Napoleon actually did rape and pillage Italy, sending its treasures to the Louvre. For a more contemporary take, while Caird already updated it to around 1900, he could have more effectively moved it up several decades more to the 1930s or ‘40s—Mussolini’s Rome—and thereby comment on the nature of the police state by viewing it through a more immediate lens. After all, Hitler also had Italian artistic treasures packed up for his master museum in Linz. While Giambologna’s famous Renaissance marble The Rape of the Sabines teetered above on a crate while Scarpia attempts to brutalize Tosca—a wry comment—Caird’s complete disregard for context and historical integrity dissolved this masterpiece of verismo into a cliché about artistic freedom. Instead of capitalizing on the inherent qualities of this sweeping portrait of a very specific milieu peopled with passionate characters, he left it to Berti and Radvanovsky to fend for themselves. The latter two at least are worth the price of admission alone.