Wagner’s Flying Dutchman at LA Opera through the 30th March 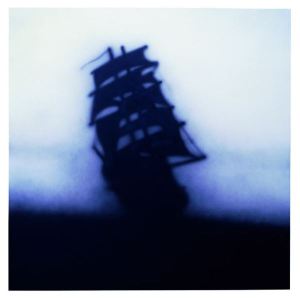 This year marks the bicentennial of Richard Wagner’s birth and the 130th anniversary of his death (born 1813 – died 1883). The composer’s Flying Dutchman—premiered in 1843 in Dresden—is Los Angeles Opera’s contribution to the anniversary year.  Although Wagner’s Dutchman is cursed—doomed to wander the seas forever in search of true love—not so this Los Angeles production. It is musically and theatrically dazzling.

Wagner wrote Der Fliegende Holländer while in Paris in the early 1840s. He had just finished his grand opera Rienzi—based on a Bulwer-Lytton novel and set in medieval Rome—with its tributes to Halévy and Meyerbeer and its five acts. While Rienzi represents Wagner’s last look at opera in its traditional form, The Flying Dutchman is a watershed in his artistic production, not to mention the art form as a whole. Here, in contrast to opera’s heretofore highly formulaic structure, the music and its story is a seamless whole, comprised of descriptive musical themes and introducing the “music drama” concept for which Wagner would become renowned. In that spirit, Wagner wanted the entire opera to be performed without intermission (like his later Das Rheingold, the first Ring opera). As music director James Conlon is a very serious Wagnerite and LA Opera a Wagner house—with a Ring cycle just under its belt—this opera (heard the 9th March) was duly performed without a break. Clocking in well over two hours, it was a bit challenging for us the audience, but the performance was so compelling and the music so rich that it worked.

Even though the LA Opera Orchestra is usually excellent, never before have I heard them sound quite like this. It was perhaps the best performance I’ve heard from them, Conlon leading an extraordinary performance of the storm-swept music. The strings shimmered; the brass and woodwinds were knock-out. So integral to the success of the evening were they that it was little surprise that the entire orchestra took an unusual curtain call on the stage afterwards. 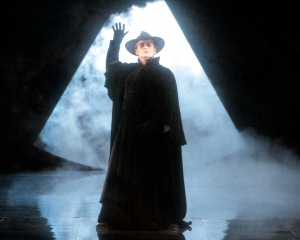 Icelandic baritone Tómas Tómasson clearly owns the role of the Dutchman, having performed it around the world, aptly proving why opening night. He brought both spectral presence and a commanding voice, slicing through the orchestra and menacing the stage, yet ultimately tender at the end with his beloved Senta. The Dutchman’s curse tried to exert its power on opening night. Portugese soprano Elisabete Matos bowed out at the last minute due to a chest cold, and was replaced with soprano Julie Makerov. A native Californian, Makerov had sung a triumphant Senta with the Canadian Opera Company two years ago, and here made her mark with a soaring, penetrating voice. She sang with intensity and passion, if however with a slight harshness, as was evident in the second act duet with Tómasson. Makerov nevertheless has tremendous presence vocally and on the stage.

Daland—Senta’s avaricious father—was terrifically sung by James Creswell. Regrettably, the important roles of Senta’s suitor Erik and her nurse Mary as sung by Cory Bix and Ronnita Nicole Miller, respectively, lacked interest and heft. On the other hand, Matthew Plenck sang the small but critical role of the Steersman and the opening aria, “Mit Gewitter und Sturm,” with plaintive yet direct beauty. This tenor seems to be making a specialty of Wagner seafaring roles, having performed at the Met as the Sailor in Tristan; in any event, it suits him. 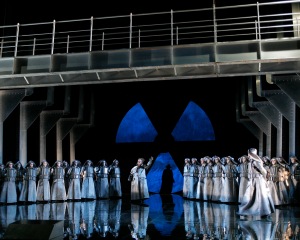 James Creswell (center) as Daland in Act I of “The Flying Dutchman.” (Photo by Robert Millard, courtesy of LA Opera)

Internationally acclaimed German director Nikolaus Lehnhoff’s high-concept production made for the Chicago Lyric Opera—fluctuating between the Northern Europe of Wagner’s time and the turn of the last century—is stunning. Raimund Bauer’s unit set is dominated by riveted steel ribs on either side that conjure up a ship’s hull and thoughts of another doomed vessel (the Titanic). The silhouette of a huge propeller at the rear of the stage serves as a dramatic entrance for the Dutchman (and lots of dry ice). In the second act, the ribs stood in for columns and beams of Daland’s Nordic home. The production was well staged in Los Angeles by Lenhoff associate Daniel Dooner. The spectacular costumes are by Andrea Schmidt-Futterer. They combine Japanese feudal samurai armor for the sailors and Issey Miyake and German Biedermeier fashions for Senta’s household and the crowds on land. Only the truly strange gold hoop skirts of the spinning maidens (a weird and literal touch here) struck the wrong tone.

Lenhoff’s interpretation is a kaleidoscope of cultures and time periods. The age-old tale—as here retold by Heinrich Heine via Wagner’s own libretto—emphasizes the phantasmagorical world that Dutchman—and Senta—inhabit. For the first time with this opera, Wagner deals with the theme that will essentially dominate the rest of his career: redemption through love. The Dutchman’s ship encounters Daland’s as the latter attempts to sail into home port. In his ship known as the “Flying Dutchman,” the doomed sailor restlessly roves the waves age after age, as he searches for the woman whose love will redeem him from his wanderings. The Dutchman tempts Daland with riches, who readily agrees to marry off his daughter Senta to him. In the second act, at home Senta broods over a portrait of the Dutchman, dreaming of the eternal love that would save him (here Lenhoff smartly employs a stage scrim with an Ed Ruscha-like shadow of the cursed captain looming over the entire scene). In the final sequence, the sailors and the maidens begin the marriage celebrations only to be spooked by the Flying Dutchman crew’s ghostly mocking, while Erik attempts to save Senta from the Dutchman (and herself). He only succeeds in driving her away and towards the Dutchman’s salvation and her own doom. In this production, the closing scene has Senta—rather than jumping off a cliff or ascending with the Dutchman into the heavens—walking calming through the mists—or over the waves—away from the audience. It is a mysterious, open-ended culmination. Lenhoff aptly renders dreamlike this neo-German Expressionist-inflected fantasy as as he explores the dark corners of our desires.