Vermeer at the Getty until the 31st March 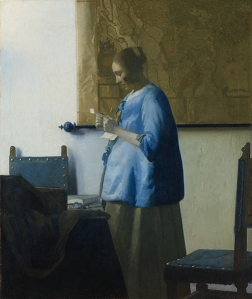 Johannes Vermeer 1632–1675)
Woman in Blue Reading a Letter, c.1663–64
Oil on canvas
Rijksmuseum, Amsterdam. On loan from the City of Amsterdam (A. van der Hoop Bequest)

Very little if anything goes on in a painting by Johannes Vermeer: perhaps a little music making, peering out of a window, chatting with a visitor. Letter writing, reading and receiving is a popular pastime in the artist’s pictures. Quietude reigns, shadows lengthen, only flute-like tones emanating from a virginal or the plucking of a lute interrupt the silence. The overall mood is one of timelessness, a moment frozen.

Perhaps that is the enduring fascination we have with Vermeer’s art. In their apparent ingenuousness, we are able to project our own narratives and emotions onto his paintings. Although he achieved notice in 17th-century Holland, by the 18th-century Vermeer was forgotten. Since his work was rediscovered by art historians over 150 years ago, his paintings have been treasured above most. Currently, the West Coast has the rare opportunity to inhabit the quiet world of the painter from Delft at the J. Paul Getty Museum until the 31st March 2013. There are only about 35 paintings by Johannes Vermeer that survive; there are none in California collections. So the exceptional opportunity to have Vermeer’s Woman in Blue Reading a Letter (c. 1663-64) for a brief six-week visit is most welcome, made possible by a decade-long renovation of the famed Rijksmuseum in Amsterdam.

At the moment, the painting hangs in the Getty Museum’s painting galleries amidst its own strong group of Dutch pictures (former director John Walsh was a Dutch painting specialist). Vermeer’s Woman in Blue has been installed in the center between Jan Stein’s The Drawing Lesson (1665) on the left and a Music Lesson (c. 1668) by Gerard Ter Borch on the right. It’s an apt comparison for a number of reasons. First these genre—or everyday—subjects share certain similarities of format and theme and they were all painted within ten years of each other. Ter Borch and Vermeer—along with other practitioners of the day like Pieter de Hooch—portray similar scenes set in rich interiors with young woman, cavaliers and maids at various activities. Steen’s superbly anecdotal and polished style seen next to Vermeer’s painting comes off here slightly like a caricature. Ter Borch’s capturing of the affects of light on figures and fabrics don’t even come close. So between these three pictures, one can apprehend the general trend of this sort of painting in the Dutch Golden Age. We can also readily see the difference between two very talented painters and a master of the stature of Vermeer.

As I said at the beginning, not much is going on in Woman in Blue Reading a Letter. She intently scrutinizes the missive, standing in front of a table which itself abuts a window just out of view. The cool, soft morning light has just begun to penetrate the room (note the deep shadow remaining in the right hand corner of the picture); the woman wears a blue–silk bed jacket. Everything is perceived through this aura of cool blue morning light, relieved only by the ochres and fleshtones of the large map hanging on the wall behind the woman and her own bent profile, respectively. However, note that her arms appear colder, more bluish than her face, extending as they do into the early light, holding the letter. Not only are the shadows cast in blue, but even the black metal finial on the map rod—painted as mediated through this early morning light—reads blue, not black.

It is a symphony of blue and one must think inescapably of Delftware. By the mid-17th century, Vermeer’s hometown of Delft was well known for its distinctive blue-and-white ceramics in imitation of Chinese porcelain. It is apt that blue—an expensive pigment—should be so celebrated in Vermeer’s painting and in this particular picture.

The artist’s glorious monochromatic palette here—at least our appreciation of it—has much to do with its amazing recent restoration. For the first time since the Rijksmuseum acquired the painting in 1885 on loan from the City of Amsterdam, it has been cleaned. Extensive moisture damage from the back of the panel along the lower edge has been repaired. Since I first saw the painting almost two decades ago, it is extraordinary how conservators have brought the picture back close to its original appearance, pulling the painted surface together into a more integral whole (aging cracks—called craquelure—and paint loss have been minimized beautifully).

Additionally, four loans of Dutch “cabinet”—or small-scale—pictures from a New York private collection are seen opposite the Vermeer and comment wonderfully on it, especially one by Fran van Mieris the Elder. Van Mieris specialized in the sort of spectacular painting effects of rippling silks and exquisite detail. His Young Woman Feeding a Parrot (1663) is painted with the same optical sensibility as Vermeer. Note especially the parrot’s bird perch painted in a soft light, so subtly modulated.

It is this “optical sensibility” that is critical to consider with Vermeer. The delight of his consummately crafted pictures are due in large part not only to the way the artist manipulates light to describe his subject but the light effects in themselves. That is to say, some passages are generalized, while others—like the chair back finial, the nail studs in upholstery or a pearl earring—can sparkle with jewel-like highlights. It is probable that Vermeer used a “camera obscura”—an early type of camera—to achieve a framing, clarity of composition and focus of light. He was also well versed in complex, analytical perspective which describes his complicated interiors.

Don’t forget, the 17th century was the burgeoning Age of Science and Exploration. Giants like Sir Isaac Newton, Galileo and Anthony van Leeuwenhoek were at work. The latter was the renowned developer of microscopes and lenses. It also so happens that Vermeer and Van Leeuwenhoek must have known each other; the latter was a trustee of the artist’s estate. Optics and empirical observation were in the air (no pun intended). Artistic masters of the highest stature—Vermeer, Rembrandt and Velázquez in Spain—were manipulating paint on canvas to achieve effects as mediated by light and atmosphere in reality.

So there is a great deal to consider when you view this precious little painting in Los Angeles, here for only six weeks. It flies home to Amsterdam to reopen the Rijksmuseum on the 13th April. Go quickly and prepare to be amazed.